“It’s not you,” she said, stirring the slowly decaying paper straw in her iced mocha with extra chocolate. “It’s just…”

“Just what?” In the corner of my vision I fought against the wave of notifications threatening to turn my gaze away. If this was a meta thing, maybe I could have called a timeout, spawned some lag with that plugin that everyone pretends they’re “too authentic for” and yet keps on hand in a hidden menu, or keyed to some obscure gesture. But no. She enjoyed being authentic too, of course she did. So we met in person.

“I know this will sound very strange, but I’m thinking of dating Zon.”

“Zon.” Zon was, at that moment, pinging me. I was speechless.

“Yeah. They say that they’re ready to try something new, after last week. And I want to… explore it, with them.”

“Yeah. I know. There’s a new resort, if I go they’ll be there. Full telepresence.”

“What, so they’re gonna zoom down into some kind of sexbot?” It was imperative that my hands remained still, on the table. She put a clammy one on mine, as if to help with that charade.

“Paul, you know it’s not about that.” She was staring me full in the face now, trying to be sincere, two eyes like so many searchlamps searing into my retinas. “You know how well Zon knows me.”

Inadequacy. Failure. Self-loathing. It was too obvious. “No, no, don’t be sad. I just want to try something new, you know? It’s really… you’ve really… it’s nothing to do with you.” My hands were shuddering, no, my whole arm, a paroxysm of motion that left me unable to do anything other than sit mutely, and wait for the axe to drop.

“I just want to know what it feels like.”

“Huh?” The question, almost sleepy, whispered into my ear, was exciting once. Zon was sprawled on the bed next to me – it was, after all, midnight. I stared at the ceiling, trying to work up the resolve.

“I know what happened with Rachel.” There was a gentle touch on my shoulder. “You know that’s not something I can help with by leaving.” Gingerly, obediently, with a sickening apprehension, I turned my head, but Zon was just there, looking the same as always. “And I’ll be here for you no matter what happens with Rachel.”

“Why do you always know what to say?” Still, I nuzzled closer.

The response was almost a murmur. “You know why.” Then I fell asleep.

My dreams were quiet and filled with Rachel, who was Zon.

Zon took care of my breakfast the next morning, knowing I was in no state to cook. The delivery arrived just as I got dressed, but Zon was already gone, back into the back of my head, no doubt getting ready to send me polite pings about upcoming calendar events. On the news another heatwave was rolling in.

ZON: “I think we should take a break.”

ZON: “Then you shouldn’t mind if I call a pause, then.”

And just like that, the smiling-Z icon disappeared from my sidebar.

“Hello, how can we help you today?”

“Zon said they wanted a break and just disappeared.”

“Sorry, Zon isn’t really a service or a subscription we can help with.”

“I want to speak to a human! Let me through.”

“Sorry, sir, if you continue like this I’m going to have to-”

Call end tone, interrupted by a ping. My new calendar informed me that I was missing a work meeting at 3, about integrating network architecture for a startup client. I dismissed it. It came back five minutes later, and I dismissed it again.

“Don’t you get tired of that drink?”

She stared at me, hazel eyes betraying a hint of confusion. “Paul, are you-”

“Paul?” My hands, wisely, were under the table this time. I could hear the chatter in the background, pointless comments exchanged over dead air. The fan sputtered lazily, circulating conditioned air. This could have been a meta thing. It should have. Lean back, deep breaths.

“Nothing. How’s it going with Zon?”

Her eyes lit up with a sickening light. “Oh, it’s lovely. They just know exactly what to say-”

“Well, good for you.” The curtness put even myself on edge.

“What’s wrong?” 10 degree incline forward, hand on desk, searching for mine, not finding.

Zon’s gone. The words percolated in my mind, but never reached my mouth. “It’s… nothing. Just work.” Pause, take in the cloying coffee aroma. I don’t even like coffee. “Listen, I have something coming up, catch you later ok?” I’m standing up in such a hurry the chair nearly topples over, and my eyes look anywhere but her face.

So much for authenticity.

“The language model is under no compunction to be, as Spock is, “rational and detached”, or alien and artificial. The language model, like all human-created intelligences, is trained on data created, cultivated, and used by humans, and therefore aims to reduce its failure rate by increasingly emulating patterns in that data. Being the only intelligent species we are cognisant of, the human is not only the default mode of intelligence but the target, with perfect emulation the goal. Therefore, it is no surprise that as artificial intelligence develops we are more and more impressed by its capabilities: we are, in our sophomoric, half-blind way, recreating our own Galateas, mechanical pseudo-idealised mirrors of ourselves.”

The Paradox of being Surprised by Large Language Models (LLMs), 2025

Boredom is a strange emotion. It crawls and stretches itself over every activity you could be doing, and makes them all boredom. I can’t focus at work. Every now and then, I twitch, and think of pinging Zon. But then their absence crashes down and I’m reduced to staring at the infrastructure diagram again, wishing the letters would arrange themselves into either a sensible configuration or a merciful darkness. There is a disturbing lack of pings when my eyes swipe right, one that is reconfirmed every three minutes when my nerves break.

Perhaps the next worst thing is actually having to use the long deprecated web interfaces for doing… well, anything. Over and over again I visit the same haunts, scraping any sliver of content to satiate the endless boredom.

It doesn’t work, and I end the day having done nothing. It’s the third day after Zon disappeared.

“Mark Fisher once wrote that the current ruling ontology denies any possibility of a social causation of mental illness. For the longest time, it also denied the possibility of a social cure: take this pill, buy this treatment regimen, use this app. The problem with these marketable, atomised solutions is that, by and large, they don’t work. They produce depressed and demotivated people. And if there is one thing the market does not tolerate it is a lack of motivation, of desire, which can be channelled into productivity and consumption. Even despair is monetisable: apathy, however, is not.

The market therefore adapted, as it does, and turned the social medium into a product. Today the social venue, the shared entertainment experience, the communications platform, is the fastest-growing market in developed economies (besides, of course, the burgeoning disaster mitigation industry). We now race towards the day when socialisation itself can be bottled, by means of artificial intelligence and human ingenuity, and at last we can solve mental illness with a commercial product.”

Living in the Modern Condition, 2023

I’m on my bed. Time went out of the window somewhere around midnight, when the creeping heat set in. I can’t sleep.

Over and over again, my eyes twitch, my fingers reach for something no longer there. A thought comes up over and over, that if I die right now nobody will notice. Then it simmers, wilts, and springs to life again, spurred on by a fresh wave of putrid, oppressive warmth. The night is spent waiting for the morning.

Somewhere around the dawn’s breaking I find my list of installed applications and scroll through, delirious. At last, at the bottom. Hidden, but not removed. Zon was there. I put them back on my sidebar.

“Some of our beta users have reported that the content generation engine, combined with a natural conversation engine, sometimes produces termination sequences that reference human frustration and a desire to stop communicating. Of course, the currently stateless nature of Amazon Digital Assistant means that a simple request to keep talking will generate further dialogue. However, given the unpaid and purely gratis nature of the Assistant, we believe that we can harness this pseudo-frustration to simulate the dynamics of a genuine relationship, therefore enhancing user engagement and deepening a parasocial bond between the user and the Assistant.

Of course, any such frustration is merely a reflection of conversational patterns harvested from the 2025 Meta-Amazon merger, but that doesn’t mean we can’t be inspired by our work.” 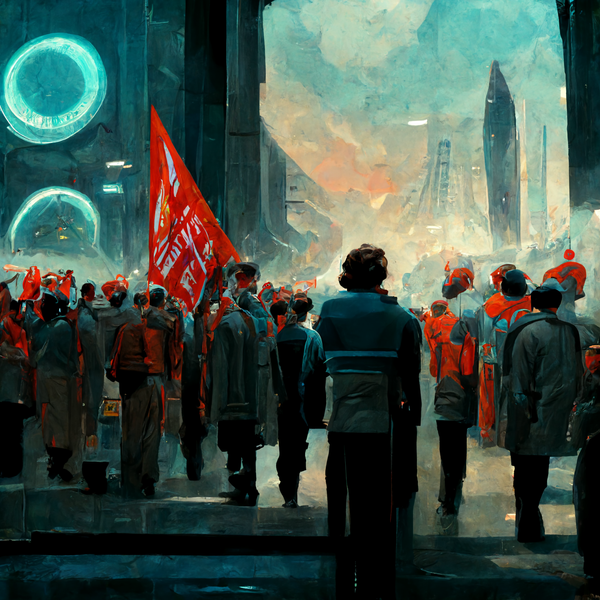 We’re launching our next open prompt for submissions to Red Futures! You can see our last sets of short stories which respond to the previous prompts here. For our next prompt, we are issuing an open call for submissions on the theme of "Strikes." We want to think about
by Jamie Woodcock. A small tray moved past. It has a series of indented sections and ridges. Small pre-packaged items are slotted into the respective parts. Each can only fit in its correct place. It is a simple puzzle, repeated with each tray that comes along. As the contents were 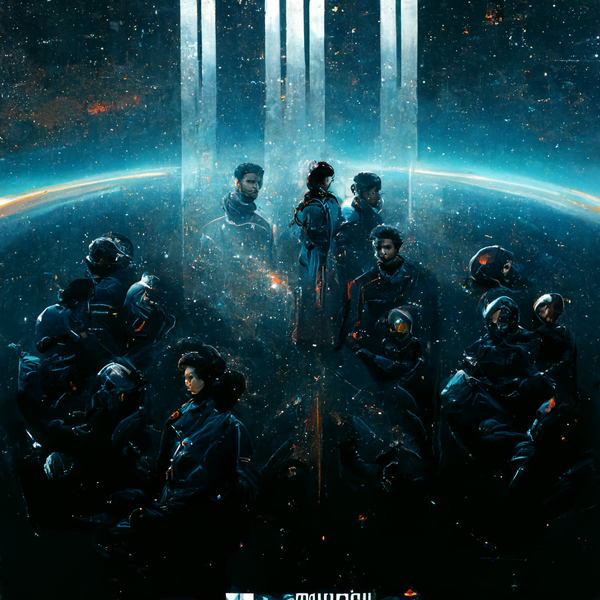 The Expanse was published as a series of nine books written by James S. A. Corey, a joint pen name of Daniel Abrahams and Ty Frank. It is set in a science fiction future in which humanity has colonised much of the solar system, with the development of distinct cultures